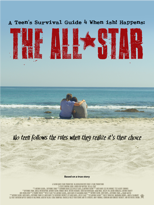 Trey, a sophomore in high school and finds out his mother turns terminally ill and leaving him and his brother Tyquan to live with their stepdad Ron. Uncomfortable with their new living arrangements, Trey and Tyquan move in with their best friend Raheem. Trey is dealt another blow when Tyquan’s dad, a famous producer in Hollywood wants Tyquan to live with him. Trey is forced to make a life-altering sacrifice. Starring Tayevonne Evans, Angela Whitherspoon, Romare Smith and others...